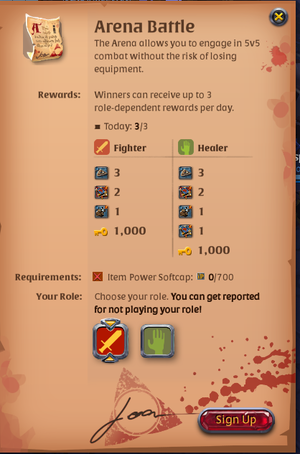 The Arena is an instanced PvP matchmaker where two teams of 5 players fight in a non-full-loot environment for victory.

To enter the Arena, a player should select "Activities" from the top right menu and then Arena. Alternatively, a player may visit Arena Master Joan. They will then be presented with the option to join Solo or as a group for the 5 versus 5 Arena Battle.

Players must wear gear that has an average of 700 Item Power. Within the arena, all gear is "soft-capped" at 800 item power, and maxes out at 900 item power. Players may join the arena queue as either healers or DPS. or they can select both roles provided that they will play the role they are given at the start of the arena.

All arena fights require at least 1 healer on both teams.A DPS may run any non-healing weapon with any type of armor, so long as it meets the average item power requirement.

Players will receive all of the following rewards for winning an Arena match (can only be collected 3 times a day/ queue type).

Starting with Queen Patch 13 the arenas provide the following rewards

Arena Sigils can be turned in for rewards at the Arena Master in each city.

Retrieved from "https://wiki.albiononline.com/index.php?title=Arena&oldid=41630"
Category:
Welcome to the official Albion Wiki, the comprehensive reference written and maintained by the players.