Difference between revisions of "Corrupted Dungeons" 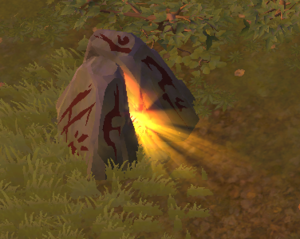 Corrupted Dungeons are new single-player dungeons found throughout the open world. After choosing a difficulty level, players enter and begin cleansing corrupted creatures, which grant Infamy points. Players can also invade or be invaded, with the invaded player given a choice between fighting the invader or destroying demonic shards to banish them. Killing another player grants a portion of their Infamy; higher Infamy levels give access to higher-level dungeons and overall better rewards.

After choosing your difficulty level and entering the dungeon, you’ll find yourself in a place infested with demons and corrupted creatures. To complete the dungeon, you'll have to cleanse these creatures. Each creature slain will award Infamy points. Different enemies will yield different amounts of infamy based on their difficulty. However you will find three mini-bosses inside, two "mini" (each give you 1/5 of infarmy needed to get end dungeon) and one made from normal mobs.

When you’ve collected enough Infamy points, the final boss in the dungeon appears. By defeating it, you can claim to the loot rewards of the dungeon. In addition, the Infamy gained will remain with you, showing your place in the Infamy rankings as well as permanently boosting your rewards in Corrupted Dungeons.

Finally, at the end of a dungeon run, a portal to another Corrupted Dungeon appears and allows you to start another dungeon right away - or you can leave and take your loot back to the city.

How Does PvP Work?

In every corrupted dungeon is a demonic shrine that players can use to sign themselves up to invade other players. Once a player has signed up, the game will regularly check for a potential invasion target. If such a target is found, the invading player will be pulled from their dungeon into another player’s dungeon. However, if you gain 4/5 infarmy before signing, and then click on demon packt, the enemy will invade you immediately, and there is no chance that you will go somewhere, it's really helpful in case you use a kite build or something which needs prior preparation.

You can get invaded by another player even if you didn't sign the shrine, so take care!

To add tactics and depth to these encounters, there are a number of special features players can use to try to outsmart their opponents:

NPC positions are marked on the minimap, allowing you to guess your opponent's position based on the creatures they’ve already slain. Watcher demons will mark any player they encounter on the minimap for their opponent to see. And last but not least, there are a large number of traps and hazards which you will need to avoid, or actively use to outsmart and defeat your opponent.

There are three different types of corrupted dungeons, which separate the difficulty of the mobs, the rewards, and type of PvP.

You can choose between these levels:

*For each individual item, IP above 1000 gets reduced by 80%. This means if you bring a 1100IP item the IP inside a corrupted dungeon will change for that individual item to 1020IP.

You only can join into the Slayer difficulty if you already have 100k Infamy Points.

Retrieved from "https://wiki.albiononline.com/index.php?title=Corrupted_Dungeons&oldid=46711"
Category:
Welcome to the Albion Online Wiki, the comprehensive reference written and maintained by the players.