Enchantment Rate Modifier is a predetermined chance between 1 - 100% for a resource node in a zone to appear in an enchanted variant (uncommon, rare or exceptional). Every area has its own value with some areas being better than others for resource gathering.

Every 30 (?) minutes the game rerolls resource nodes, so a resource node can spawn, despawn, or remain spawned. And it also rerolls its enchant, so the enchant can increase, decrease or stay the same. 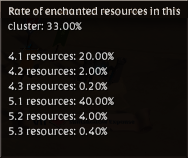 Slowtree Plain has an enchantment rate modifier of 33%, details can be seen when hovering the mouse over the indicated area.

Rates on the Royal Continent can vary between 8-33% depending on their proximity to each of the royal cities. To quote the developers:

Resource distribution has been updated to encourage travel and transport throughout the Royal Continent. The territories around the Royal cities now hold more enchanted resources, providing an excellent source for economic and equipment boosts. [1]

Two Tier 5 yellow zones between each Royal city and Caerleon are now red zones with a 20% enchantment rate for Tier 4 and Tier 5 resources.[1]

Retrieved from "https://wiki.albiononline.com/index.php?title=Enchantment_rate_modifier&oldid=20664"
Category:
Welcome to the Albion Online Wiki, the comprehensive reference written and maintained by the players.