This is an article converted from the guides section on the homepage. Please help by improving this article or editing it.

Gathering might not be commonly associated with combat, but it does require players to go into the open world and face its inherent dangers. Whether you are fighting a pack of enchanted direwolves or are venturing into bandit territory to gather the best resources, your gear and your skills are what will determine if you ride home with a backpack full of goods or get a fast trip back in your underwear.  This is why each gathering profession (Harvester, Lumberjack, Miner, Quarrier and Skinner) has its own equipment with a number of spells to help them with their profession.  These gathering gear sets focus mainly on survivability and escape, while also granting passive bonuses to your gathering yield. And unlike traditional combat armors, gathering gear does not require kill fame from mobs to level but instead levels with your gathering tool allowing you to skip the hours of dungeon runs in favor of furthering your chosen profession.

Each set consists of four items: a Cap, Garb, Workboots and Backpack. These items are unlocked simultaneously with the gathering tool itself through the gatherer line on the Destiny Board starting with Tier 4. For example: to unlock the Tier 5 Lumberjack set you will need to unlock the Expert (Tier 5) Lumberjack node.  Your mastery with that tier tool will improve your mastery with the gear, so keep gathering to raise your gear’s item power!

The Backpack, which goes into the cape slot, has a passive ability which reduces the weight of its respective resource by 30%. You will be able to carry more resources than ever before!

The Cap, Garb and Workboots each have one passive spell that increases gathering yield for their respective resource. This means you will have more chance to get extra resources while you are out gathering and have your gatherer gear equipped. The bonus gathering yield increases with every Tier.

When equipping an entire set, your gathering yield of the corresponding tier of resources and below is increased by:

On top of their useful passive spell, the Cap, Garb and Workboots each have a set of basic active spells as well as one unique active to choose from:

If you are collecting Fiber, the Harvester set is the one for you!

Throw out magic pollen which will confuse all enemies around you, making them walk around randomly. Using this spell will also turn you invisible. This invisibility breaks if you receive damage or if you damage someone else.

Apply a shield to yourself, which absorbs damage and lasts for several seconds. As long as the shield is active, your gathering speed is increased. If the shield gets prematurely destroyed it explodes, rooting and dealing damage to all enemies around you.

Dash towards a target location. During the dash, you are invisible and immune to forced knockback effects. After you arrive at the targeted position, your move speed and maximum load are increased for several seconds. 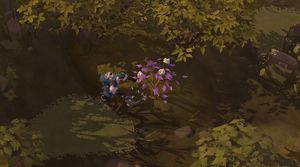 Throw out tree trunks behind you. Every enemy hit will be knocked away.

Apply a purging shield on yourself, increasing your gathering speed and resistance for several seconds. While the shield is active, enemies lose all positive status effects whenever they damage you.

Create a shield on yourself that can absorb damage and lasts for several seconds. While the shield is up, your movement speed and maximum load are increased. Attacking someone will remove the shield from you.

Spend all your time mining Ore? Get yourself some Miner equipment!

A wind shield surrounds you for several seconds. Every time you receive damage, enemies around you will be knocked back. Additionally, your gathering speed and armor and magic resistances are increased.

Increase your movement speed and maximum load. After activation, you cannot cast spells or attack for a little while. 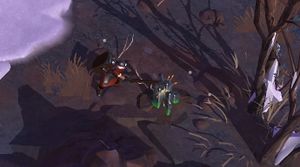 Those wielding a strong hammer to gather Stone will be able to make good use of the Quarrier set.

Increase your crowd control resistance for several seconds. Enemies who damage you are slowed (this slow effect stacks up to nine times).

Increase your gathering speed for several seconds. Your resistances increase every second (this increase stacks up to ten times). 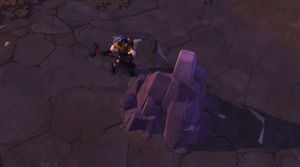 If it is Hide you are after, get yourself a Skinner set to get that extra edge over the wildlife waiting for you to face them.

Place a bear trap under your feet. The first enemy that walks over the trap is slowed and takes damage over time. Additionally, it reduces the resistances of hide animals.

For the next 40 seconds, all your normal attacks will poison hide animals and deal additional damage over time. This poison does not deal damage to other targets. Additionally, you will receive a shield that increases your resistances and heals you over time.

Scent of the Wilderness

Increase your movement speed and maximum load for several seconds. After activation, you cannot cast spells or attack for a little while. Creatures will avoid attacking you for the entire duration. 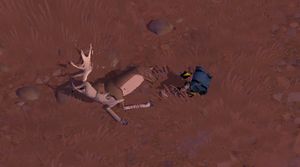 The gear of course also needs to be crafted, which can be done by Toolmakers. The gear crafting unlocks simultaneously with crafting the tool. For example, if you can craft your own Tier 6 Pickaxe, you can also craft Tier 6 Miner Gear. So head to your nearest reasonably priced Toolmaker or build your own on your personal island and craft the latest in gathering fashion. You’ll find the Cap, Garb and Workboots under the Armor tab at the Toolmaker and Backpacks are found under the Accessories tab.

Retrieved from "https://wiki.albiononline.com/index.php?title=Gathering_Gear&oldid=8895"
Welcome to the official Albion Wiki, the comprehensive reference written and maintained by the players.