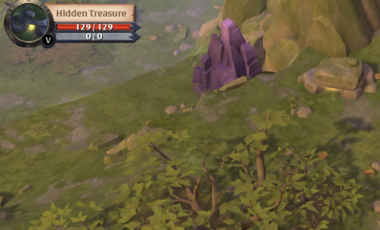 Treasure is ALWAYS shiny! Makes it possible to spot from a distance.Treasure can be emitting colors in yellow-gold and ruby-red.

Hidden Treasures are chests that contain loot and silver which constantly spawn at different locations (timer unknown) in tier 4+ maps. They can be found in Blue Zones, Yellow Zones, Red Zones, Black Zones (can't be found in: burrows, demon realm and the cities).

To open a hidden treasure a player must attack it and bring its HP to zero.

When the HP reaches 0 (zero) the treasure gets destroyed and it drops a pile of silver and a loot bag. The amount of silver as well as the loot increases with the tier of the treasure.

The amount of silver each tier of hidden treasure drops is random and it varies between these limits:

Hidden treasure loot bags have a:

Hidden treasures have a unique appearance based on the biome of the map they're in.

Retrieved from "https://wiki.albiononline.com/index.php?title=Hidden_Treasure&oldid=18920"
Welcome to the official Albion Wiki, the comprehensive reference written and maintained by the players.