Difference between revisions of "Resource"

Resources are materials that are gathered from the environment or from skinning animals.

Resources that are gatherable from the open-world are:

Resources can be used to create weapons, armors, and buildings in Albion Online. As with all other game elements, resources are divided into eight tiers. To gather any resource, an appropriate tool of no lower than one tier below than that of the desired resource must be in the player's inventory (not necessarily equipped), requiring the player to progress through the Destiny Board to unlock the ability to harvest successively better materials. Each resource must first be refined at their corresponding crafting building before it can be used in crafting.

The more dangerous the zone, the higher the tier of resource that can be found:

At each tier level beyond tier 1, new traits are unlocked: 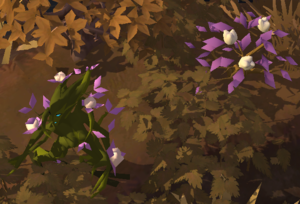 Comparison between a stationary T3 fiber node and its corresponding attackable enemy.

During a day a resource can be gathered from its node more than once. It will respawn in intervals, depending on their tier:

More information about resource mobs, aspects and bosses can be found in their article. 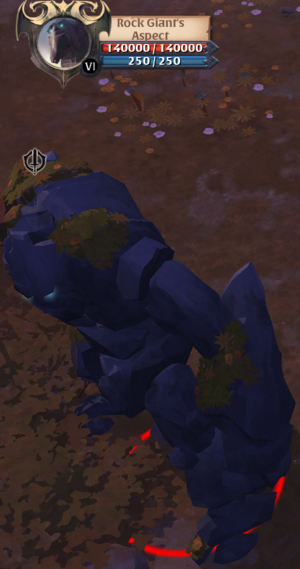 Beyond normal attackable enemies, there also exist aspects that can spawn for every resource according to their biome. They are boss mobs that usually require a team to take down and will yield a stack worth 500 T6 resources. They can spawn enchanted. 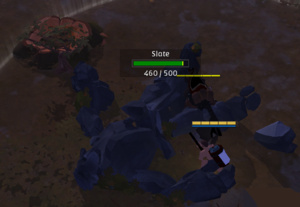 Some zones will have icons like seen below, called resource outcrops. Around these, you will find an increased amount of nodes. They will also spawn a resource boss, not to be confused with an aspect which can spawn anywhere in accordance with their biome. If you find a resource boss and kill it, you can note its respawn time will be precisely 48 hours from then on. 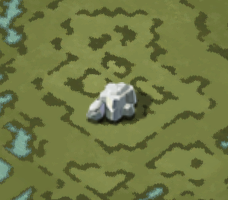 Resources can spawn enchanted. Weapons and armor crafted with enchanted resources will be stronger, their item power increasing by one tier per enchantment rarity.

Bonepool Marsh has an enchantment rate modifier of 19%, details can be seen when hovering the mouse over the indicated area

Rates on the Royal Continent can vary between 8-33% depending on their proximity to each of the royal cities. To quote the developers:

Resource distribution has been updated to encourage travel and transport throughout the Royal Continent. The territories around the Royal cities now hold more enchanted resources, providing an excellent source for economic and equipment boosts. [2]

Two Tier 5 yellow zones between each Royal city and Caerleon are now red zones with a 20% enchantment rate for Tier 4 and Tier 5 resources.[2]

Retrieved from "https://wiki.albiononline.com/index.php?title=Resource&oldid=26486"
Categories:
Welcome to the official Albion Wiki, the comprehensive reference written and maintained by the players.