Resource Territories, also called Watchtowers, are small areas within zones that are claimable by guilds and contain many harvestable resources. These territories contain resource nodes according to the map biome and offer members of the controlling guild a gathering yield buff (+50%) while inside the territory. Resource territories are protected by guards and a deadly watchtower. The Outland watchtowers used to contain T8 resources that would spawn daily inside the territory, but this was changed with the Nimue update. Territories located near black zone raid zones may still get random T8 spawns inside them as well as random T6 mini resource boss (aspect). 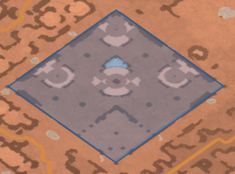 At the beginning of each GvG Season and during mid-season resets, all guild ownerships of territories will be lost and taken over by NPC invaders.This serves as a reset day where all guilds can fight to reclaim new territories. Territories can be claimed with silver or fame if not owned by another guild or otherwise fought over in GvG battles. Once a territory has been claimed it must be fed or the guild's claim will be lost.

Clicking on the territory's icon on the world map will show the territory's summary information including the name of the controlling guild and any upcoming GvG battles. Owning a resource territory will grant access to a Crystal GvG in which teams fight for season points and other rewards.

Resource territories also contain storage chests and repair tables for members of the controlling alliance to use. 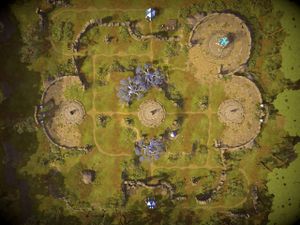 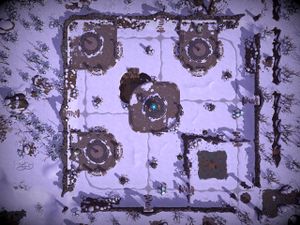 Mountain Resource Territory
Retrieved from "https://wiki.albiononline.com/index.php?title=Resource_Territory&oldid=8667"
Category:
Welcome to the official Albion Wiki, the comprehensive reference written and maintained by the players.