Roads of Avalon were introduced with the Rise of Avalon update on the 12th of August 2020.

The Roads of Avalon are a network of paths through the ancient kingdom of Avalon, opening up new opportunities for travel and transport, exploration, and placing Hideouts. 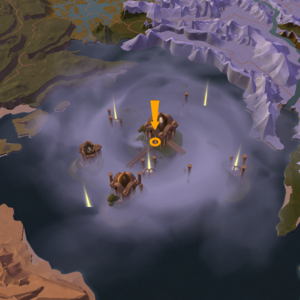 To access the roads players must enter a portal or fast travel to a hideout within the Avalon roads.

Avalonian Portals are found in the open world on the Royal continent in Red and Yellow zones, or the Outlands a.k.a. Black zone.

Portals last for a set duration that is random when the portal spawns. For example, some portals close after one hour, while others can last for 10 hours.

When a portal closes, a new portal will open on the road to either another Avalon road or the open world

Portals also have a set number of unique players that can enter them. The color of the portal denotes the capacity of the players it can transport

Retrieved from "https://wiki.albiononline.com/index.php?title=Roads_of_Avalon&oldid=46688"
Category:
Welcome to the official Albion Wiki, the comprehensive reference written and maintained by the players.