The Royal Expeditionary Forces are the second expedition that was launched to Albion. The first expedition, that was widely regarded as a failure, consisted mainly of convicts, criminals, and the desperate and only had limited resources. However, it succeeded in one important regard: it showed the King in the Old World - which is the lands outside Albion, a place without demons or any fantastical creatures - that Albion was rich in natural resources.

This expedition arrived in Albion five years ago and their mission was simple: to establish a foothold on Albion’s coast, enabling two things. One, that future arrivals would have a place to acclimatise themselves before striking out into the unknown and, two, to tax these new arrivals and ensure that a steady stream of coins makes its way back to the King’s coffers. It is a matter of some debate which duty is considered the more important.

The Royal Expeditionary Forces are divided into 4 sub-factions:

Dressed in gleaming armour and standing proud in their red and gold, the Royal Army represents the King’s might in Albion. They guard the wall, patrol the safe zones and intervene should any break the law. While they are not afraid to engage with hostile factions in Albion if they have to, their preferred tactic has been to employ colonists for the more dangerous work, that way, they only have to pay the ones that come back.

Tasked with moving goods across Albion and, where possible, back to the Old World, the Royal Stewards not only succeed in thwarting the many bandits and natural obstacles that are thrown at them, they always manage to deliver on time. For those that can afford them, there is no safer or quicker company to travel in. The Stewards operate several shipping routes along the coast, in addition to caravans that travel through the safe zones.

Clad in more muted colours than their military counterparts, the Royal Foragers were first to explore Albion’s coasts. They work ceaselessly to identify new resources in order to direct others towards them, stripping the land as fast as they are able.

For those who are willing to take the risk, there is good profit to be made venturing into Albion’s untamed areas and selling the resources found there back to the Foragers.

From the great wall, to the tents that the Royal Expeditionary Forces use, to the forges, to the statues of the Founders, all are the work of the Royal Artisans. When they first arrived, parts of Albion were transformed by their skill. More recently they have stepped back, taking a supportive role for new crafters stepping off the boat. With a tendency to stay in the cities, the Royal Artisans have seen little of Albion’s horrors and remain upbeat, enjoying the challenge of civilising these wild lands from a safe distance. 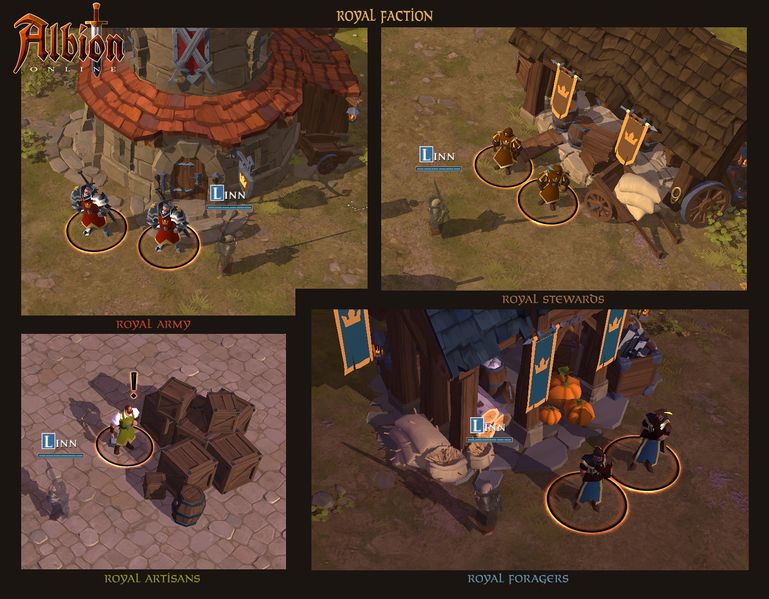 Retrieved from "https://wiki.albiononline.com/index.php?title=Royal_Expeditionary_Forces&oldid=9782"
Welcome to the official Albion Wiki, the comprehensive reference written and maintained by the players.