One of the most important factors when working with such large groups, is how they are positioned. Because players typically bring lots of AoE equipment to these encounters, battles tend to be fought around choke points, higher ground and obstacles. It is always important not to clump up and be susceptible to AoE hitting to many of you, putting strain on the healers. 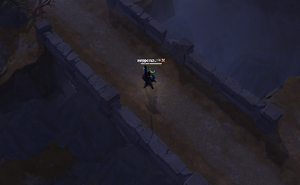 Bridge Choke:Many dungeons and maps throughout Albion have bridges. These are prime locations to use as choke points, extra advantage if you're coming in from the south for the viewing angle. Most of the time there is flat ground on either side. These offer advantages for those who can blast CCed opponents in the middle, as well as those who make it past the choke into the groups of cloth users. Be wary of over extending when fighting in positions like this as healers frequently do no go past the opening of the choke point. 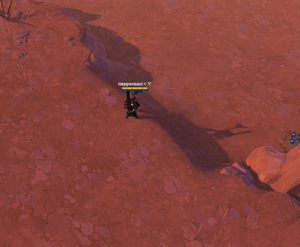 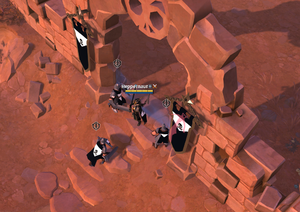 Doorway/Wall Choke:Territories and random map walls often have doorways leading through them. For teams defending a territory, this position offers an easy point to hold the opponents at, giving you ample time to react accordingly to an enemy team coming through. Attacking teams will benefit from higher ground on the outside allowing them a better viewing angle to get AoEs in over the wall. It is very important to stay away from the walls as you become susceptible to enemy fire.

When fighting in a ZvZ, the defensive CD are really usefull. They will help you to disengage, stay alive or to go further to place you dps / crowd control.

Retrieved from "https://wiki.albiononline.com/index.php?title=ZvZ_Mechanics&oldid=8830"
Welcome to the Albion Online Wiki, the comprehensive reference written and maintained by the players.