Alliances allow different guilds to band together under one name for united combat forces and shared territory control. 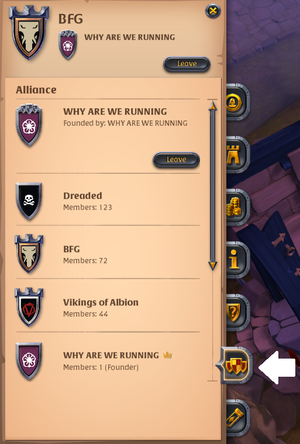 Alliances may be created by accessing the Guild Tab and then clicking the Create Alliance tab on the pop-up. Creating an Alliance has a base cost of 500,000 silver and is affected by the Global Discount. Every Alliance has a name and a tag. Alliance names can be up to 30 characters long, and Alliance tags can be up to five characters long. The Guild that creates an alliance will become that Alliance's leader guild and will have full control of who is invited or kicked from the Alliance. This position cannot be transferred to other guilds. If an Alliance leader guild leaves their alliance, then the Alliance is disbanded and all guilds are automatically removed. The Alliance name and tag then becomes available again and can be used by any Guild wishing to create an Alliance with that name or tag. Once a guild creates or joins an alliance, the Create Alliance tab within the Guild tab will be replaced with the Alliance tab. Here, Guild members can see every Guild that is a part of the Alliance, Guilds can leave their Alliance, and the Alliance leader guild can add and remove guilds to and from the Alliance. Alliance Rejoin Cooldown: 7 Days 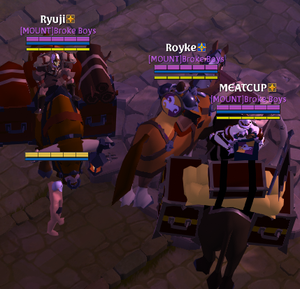 Every guild in an alliance will also receive the alliance tag to the left of their guild name underneath their players' names.The color of allies' guild name and healthbar are purple. Allied territories will be colored purple on local area maps.

All season points generated will be partially shared with all alliance members. You trade risk (smaller alliances) for rewards (more season points directly for your guild). Alliance Change Cooldown will also be increased to 7 days to make it more difficult to game the system with alliance hopping.

ALL Season Points generated are now partially shared with all alliance members.(the exception is Guild Challenge points[1], which remain to the guild 100%).

This means that the more guilds are in an alliance, the smaller becomes your own share.

Season Points will be rounded and spread across alliance members. (for instance with 33,3 for 3 guilds would be split into: 33, 33, 34)

Alliance A has two guilds in it: Guild A and Guild B

The shared points can be tracked down in the special tab.

Retrieved from "https://wiki.albiononline.com/index.php?title=Alliances&oldid=63761"
Categories:
Welcome to the Albion Online Wiki, the comprehensive reference written and maintained by the players.