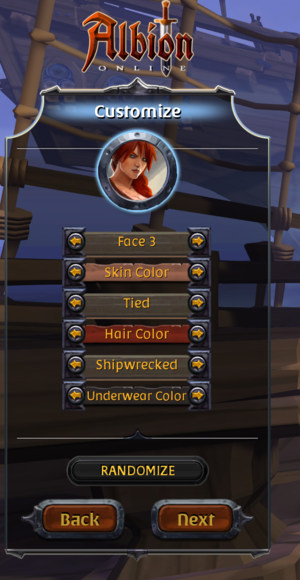 Players are required to make at least one character to join the game. Players may have a maximum of three characters per account. Currently, in Albion Online, humans are the only available race. In addition to Character Name and Gender, the following features may be customized:

Players select their first avatar during character creation. Players may also choose and earn other avatars and borders in-game. The avatar border may be customized as well. There are limited edition custom borders, for example from the monthly challenges and from the season ranking of a guild.

In-game customization of a character allows players to tailor to their play style: Albion Online uses a classless character customization system, where the equipment a character equips determines the stats, spells, active, and passive abilities available. A character can switch roles by changing equipment or even make a build that is a hybrid of various roles, such as a spell caster wearing plate armor.

If a player opts to skip the Tutorial, they are presented with the selection to choose their starting town:

Retrieved from "https://wiki.albiononline.com/index.php?title=Character_Creation&oldid=63027"
Welcome to the Albion Online Wiki, the comprehensive reference written and maintained by the players.