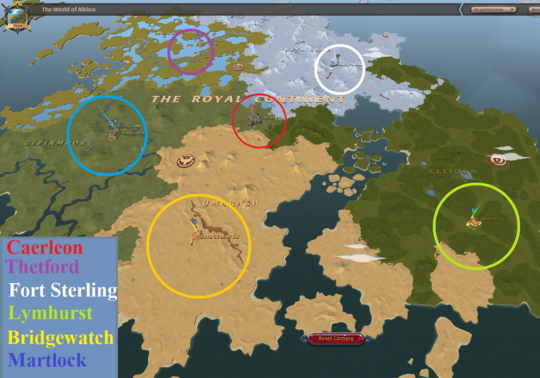 Cities and Starter Towns are safe, blue zones are considered the social and financial hubs of Albion Online. There are 5 Royal Cities and a capital, Caerleon, making a total of 6 cities and 5 Starter Towns.

Even though there are certain differences, there are plenty of similarities among the Royal Cities:

Player-driven cities are bigger in size than the starter towns, and not without reason: players can buy a building plot and construct their own buildings. The mechanics to buy a building plot are explained in Oberon patch 4. There are 80 plots in each Royal City and people are always competing to get their hands on one. The main benefit of owning a plot and building in a city is the usage fee, which is how much other players have to pay to use the building. You can set an attractive price to be a business contender, but make sure it is worth the investment in the building! Alternatively, you can also just limit the building to your friends or guild with the access rights option.

The Capital is surrounded by red zones, making the way to Caerleon very dangerous, but also very rewarding. The fastest way to cross the Royal Continent is through this amazing city, and with its proximity to all biomes, it is the strongest economic hub of Albion.

Although Caerleon works as a normal player-driven city, having building plots, special NPCs and Merchants, it is certainly not the same as the other cities. This is because it is the only city that has the Black Market.

Hidden deep within the Mists, and revealed only to the worthy, lies an ancient city known as Brecilien.

Retrieved from "https://wiki.albiononline.com/index.php?title=Cities&oldid=65340"
Welcome to the Albion Online Wiki, the comprehensive reference written and maintained by the players.