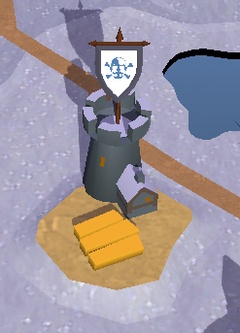 Farm Territories are one of four different types of territories that are claimable by guilds and contain eight farm plots on which the controlling guild may grow crops, herbs, or animals (see farming for more information). Farm territories are protected by patrolling guards and a deadly watchtower in the center.

There are 19 Farm Territories on the Royal Continent, 24 in Anglia, 12 in Cumbria, and 12 in Mercia.

The controlling guild is able to build one of four different farming structures on each farm plot within their territory:

Farm territories offer 100% faster grow time for any animal, Grow time doesn't decrease for plants it only increases the produce amount. For animals which require more than one growth cycle to raise, standard nurturing limits still apply. In other words, you can grow a Direwolf faster on a town plot (feeding it 2x per 24 hours) but you are still only able to nurture it 1x per 24 hour period.

Retrieved from "https://wiki.albiononline.com/index.php?title=Farm_Territory&oldid=14963"
Welcome to the Albion Online Wiki, the comprehensive reference written and maintained by the players.