Fishing is a gathering skill that was added to the game with the Lancelot patch. Players can try to catch fish in any body of water in the game. Higher tier zones allow players to catch higher tier fish. To start fishing and catch fish a player must equip a fishing rod, stand close to a body of water and throw out the fishing lure.

Depending on the zone the player is in, either freshwater fish or saltwater fish can be caught. The mouse icon will change to a fishing bob icon if fish can be caught in the water you are trying to fish in. Waters also contain school of fish. Fishing inside the circle of the school of fish yields fish more frequently and is an indicator if the waters have recently been overfished or not.

After finding a suitable body of water, a player can throw out a lure, if he has a fishing rod in his inventory:

After waiting for a short amount of time (fish bite speed), the fishing bob will move up and down, signaling that a fish bit the hook and can be reeled in. 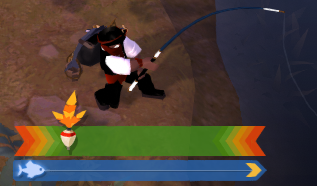 Once you get a feel for it, reeling in a fish should take no more than a minute or two. If you are fighting with the fish for longer than that, it could be you have hooked a log or rock. It could also be that your client's frames-per-second ( type the command "/fps" in chat to see it ) is below 30. If this is the case, try turning down your graphics settings or contact support for assistance.

When you start reeling a fish and it doesn't move at all, then that fish is most likely a log or a stone so you can just stop the process and move to another fishing spot.

Note: when you get a log or stone that means that small spot you're fishing in no longer has fish, you will either need to wait a bit or move to another spot to find fish.

Where to catch fish

Fish can be caught all over Albion. But there are two different types of water in the world of Albion. Freshwater and saltwater. All rivers, lakes, ponds and other similar bodies of water that can be found inland are considered freshwater. Saltwater can only be found in zones that border the ocean. A quick way to determine whether a body of water is fresh- or saltwater is by finding a pool of fish - the saltwater fish jump out of the water, and the freshwater fish swim underneath the surface in a circle. For a list of the different catchable fish, use this table. Saltwater zones, especially higher-tier zones are rarer than freshwater zones. In the table below you can find a list of zones that have saltwater borders.

Saltwater also has a different color on the minimap than freshwater. See this image as an example: 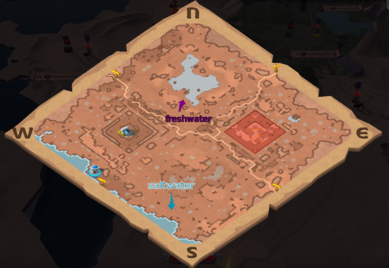 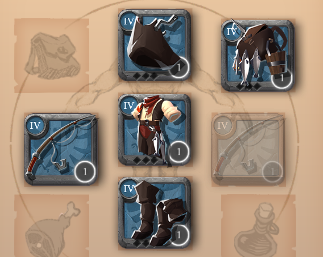 Players can use bait to increase the bite speed of fish. Bait can be crafted from earthworms at a cook. Earthworms are found when harvesting crops during farming.

Players can also use Seaweed Salad to increase the fishing speed for 30 minutes.

A list of all types of fish that can be caught can be found in the table below.

The tier of the zone you are fishing in determines the blackmarket loot up available. Runes and Tome of Insight can be also retrieved, but they are extremely rare.

List of cooking and alchemy recipes that use fishing loot

Fish can be consumed directly for various bonuses and fishing fame. Fame gained through eating fish is always half the value compared to catching a fish, with the values shown in the table including premium bonus. Fish can also be chopped up at the butcher into fish chops. Fish chops are used in a variety of high tier cooking recipes.

Below are screenshots of the different tiers of fishing gear. If you want to make them look nicer or add the female versions, please feel free to do so.

Wearing the fishing gear increases the numbers of fish, decoration and seaweed caught.

No relevant patch notes at this time

Retrieved from "https://wiki.albiononline.com/index.php?title=Fisherman&oldid=63037"
Welcome to the Albion Online Wiki, the comprehensive reference written and maintained by the players.