This is based on the original guide from the homepage here. Please help by imporving it or adding to it.

Flagging (up or down)

Player killing (PK) is what makes Albion Online desirable for some players, so it is important that they understand how the flagging system works. Flagging up essentially gives players the opportunity to participate in (Player versus Player) content within yellow and red zones. The consequences of flagging up are defined by the zone in which you are flagged in. Check out the “Zones” article if you are unsure about what exactly is meant by zones.

Players that choose to flag up can attack other players located in PvP-enabled regions (yellow/red). A player can flag up in any zone they want; however, they can only attack in the permitted zones. A player can flag/unflag by clicking the light blue emblem to the right of their characters name (shown above). Beware, flagging up enables a debuff called “criminal”, which prevents the flagged player from flagging down instantly. This debuff lasts for approximately 15 minutes. Once the debuff depletes, the player can flag back down if they choose. Attacking another player while flagged up will give you an additional “outlaw” debuff, and it will reset your criminal debuff timer. The outlaw debuff prevents flagged players from entering cities. If a player attempts to enter a city with this debuff, the guards outside of the city will attack you. The outlaw debuff will lasts for approximately 15 minutes, and it will reset each time you hit an enemy player. Both debuffs will deplete while logged out of the game. If a player is hostile and attacks another player, they will lose reputation. It is important to monitor your reputation because it can result in you not being able to enter certain cities. Your reputation can be monitored by clicking on your character’s name, then click stats. Check out the article on “Reputation System” for more information! 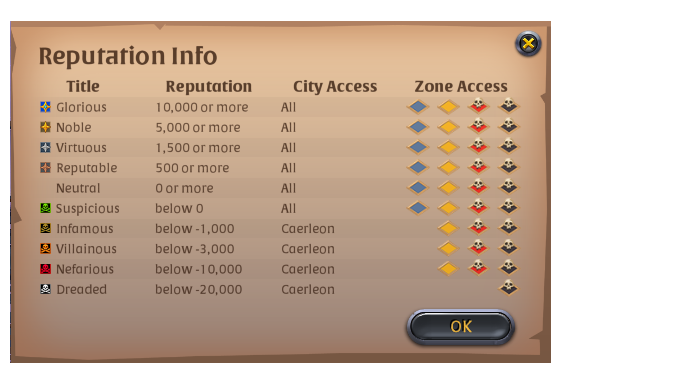 If a player chooses to flag within a yellow or red zone, they will appear as a threat on the mini-map for other players within the zone (shown below/highlighted in yellow). The hostile counter will only show the number of hostile players in the zone; it will not give away the hostile players position. Sometimes red dots appear on the mini-map (shown below/highlighted in blue), which means there are a group of players that are in a party with 9+ members (this is known as a zerg). This does not necessarily mean that they are hostile, but be sure to check the hostile counter and number of red dots to be sure. Check out the “Zerg Indicator” article for more information on zergs! 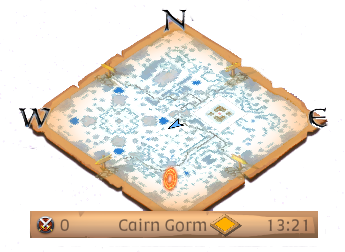 Flagging in a yellow zone allows you to knock other players down. You cannot kill them, and they will not lose gear if knocked down. They will, however, lose a minimal amount of silver (which you can take from them). Players that are knocked down in battle will suffer durability loss on their equipped gear. No gear will be lost in yellow zones unless you click the die button after being knocked down. If you are a flagged player in yellow zone and attack unflagged players, you will lose a small amount of reputation per hit and knock down. Flagging in yellow zone gives players a taste of red/black PvP content without the expensive loss of gear upon dying.

Retrieved from "https://wiki.albiononline.com/index.php?title=Flagging&oldid=40487"
Welcome to the Albion Online Wiki, the comprehensive reference written and maintained by the players.