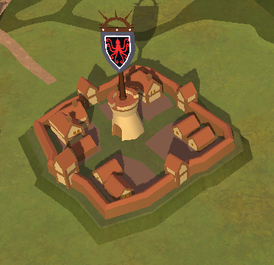 Home Territories are one of the four different types of territories that can be claimed by guilds in the Outlands of Albion.

The controlling guild can set the access level for their home territory to either public or alliance only, but most home territories can only be entered by the guild's alliance members, generally making it a safe place.

Buildings allow a player to refine materials or craft items and the home territory offers many bonuses:

One home territory can also fit six Guild halls which can be utilized for many laborers.

In addition players may set their Home Re spawn setting to one of these Guild halls allowing for quick teleportation back to this location on death.

Some guilds may choose to sell their home territory, unclaiming it for another guild to claim it. But beware, when a home territory is claimed the territory only gains one defense point, making it vulnerable to a quick capture.

Unclaimed territories can be claimed by having a guild member with proper rights claim it, which needs to be done on the correct timeframe and the member's guild needs to have at least 1.000.000 guild fame and 3.000.000 silver stored in their guild account.

Retrieved from "https://wiki.albiononline.com/index.php?title=Home_Territory&oldid=23380"
Welcome to the Albion Online Wiki, the comprehensive reference written and maintained by the players.