Rankings are a part of User Interface system. They are located in the right top corner. 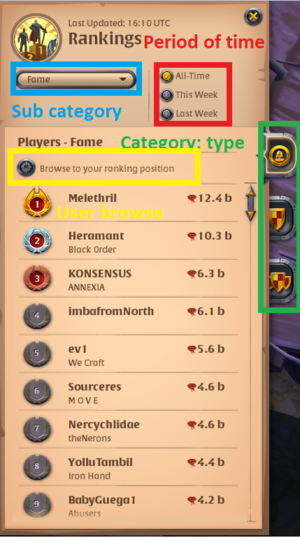 Each one shows the best players, guilds or alliances in the following filtes:

There are also sup categories in which players, guilds and alliances compares:

You can also browse your ranking position by clicking the special button. 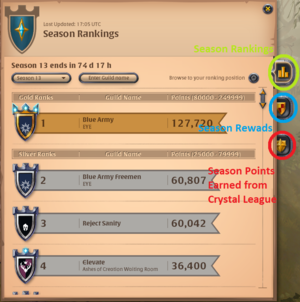 Guild position depends on season points, which can be earned from different activities.

At the end of GvG Season Season points resets and every guild starts climbing again.

Guild can be browse by typing its name or directly browsing guild in which player is.

If player was in guild more than 65 days and at the end of season has active premium status, he gets special season rewards based on guild ranking.

Season Points earned from Crystal League matches are limited to a daily maximum per guild.

The point maximum applies to each type of Crystal League separately, meaning the 5v5 and 20v20 have independend daily limits.

The daily limits depends on the value of matches available on that day, so days with Higher-level matches have higher limit.

The daily limit is tallied based on Season Points earned, before the Alliance Share is deducted.

Retrieved from "https://wiki.albiononline.com/index.php?title=Rankings&oldid=55008"
Welcome to the official Albion Wiki, the comprehensive reference written and maintained by the players.