Reputation is a rank and benefit system related to PvP play. Reputation points are earned through PvE activities which gain the character increasingly higher rank titles and benefits.

A character is considered hostile if the player has intentionally "flagged" the character to "hostile" status, or if they are a member of an opposing Faction.

A player who has flagged their character as hostile is demonstrating that they want to fight other players in PvP combat. However, even without flagging to hostile status, when venturing outside Blue zones, a character is still at risk of attack from hostile characters.

No Reputation points are lost from:

There are no Reputation point gains or losses in Black zones.

If a character is knocked-out or killed, all characters who took part in the fight suffer full Reputation losses. The Reputation loss is not divided or proportioned amongst the group.

The Reputation point penalties in Yellow zones are much smaller than in Red zones.

It is also possible to lose reputation points and fall in status. There are five negative (bad) titles: Suspicious, Infamous, Villainous, Nefarious, and Dreaded.

A character's Reputation status rank is shown as an icon next to their name above their avatar on the map. Positive (good) Reputation ranks are shown with a four-pointed star. Negative (bad) ranks are shown with a skull & crossbones. Note that you will not see this information of you have the Other Players Name display option switched off in the Interface tab of Games Settings.

To view the Reputation points and status of your character, click the portrait picture in the top left of the screen and select "Stats" from the menu that appears.

Reputation points and title rank will be shown under your character's name in the window that appears.

You can view more information about reputation ranks by clicking the "i" icon beside your reputation point score. Hovering your mouse pointer over the different titles will show the defensive bonus granted to you in Yellow and Red zones against attacking players. No defense bonus is granted in Black zones. 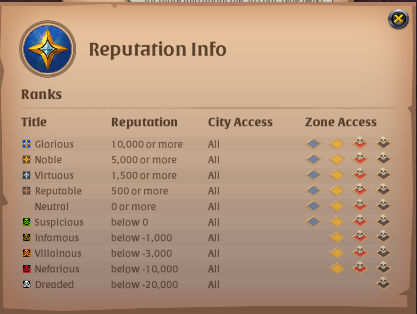 You can view the Reputation point score of other characters by clicking on their avatar to select them, then clicking their portrait icon at the top of the screen and choosing "Stats" from the menu that appears.

A character is also hostile if they are a member of an opposing Faction.

Characters are granted increasingly higher defensive benefit buffs against attacks from other characters with each positive Reputation rank title. The maximum at Glorious rank is 9.091% damage defense and 10% crowd control resistance vs player attacks. This benefit is only granted in the Royal Continent zones. There is no benefit granted in Black zones.

Characters suffer increasing restrictions on what zones they can travel with each negative rank title. At the worst rank of Dreaded, a character can only travel in Black zones.

Tips for Peaceful Players and Criminals

To show you how much that matters: if you are neutral, killing you costs 100 reputation to your killer. If you are Reputable, it goes up to 250. If you are Virtuous, it’s 500.

Our clear recommendation is to at least have Reputable status before doing serious activities in the yellow and red zones, unless you really don’t mind losing some gear in the process. The level where killing you truly hurts is from Virtuous status onwards.

What will help you a great deal is travelling in groups, even if they are small. Here is why: If you are in a group of 3, say, a solo player will not be able to kill you. If he brings friends, say for a total group size of 10, they will be able to kill you, but all of the attackers would get full reputation loss for each kill, hence making the total reputation loss equal to 30 1v1 kills.

Now, these levels of reputation loss are not sustainable for criminals in the long run, as they will get banished to the outlands. So they will have to be picky over their targets. The best thing you can do in order to not make yourself a worthwhile target is to only bring cheap gear that you can easily replace, and, when gathering, not to gather too much at once before going back to the city.

Note that as a peaceful player, you should really never flag hostile in yellow or red zones. You risk losing a lot of reputation if friendly players then draw you into combat. The higher your reputation is, the harder it is to grind back the reputation that you have lost.

In yellow and red zones, always watch the count of hostile players next to the mini-map. The higher that is, the more dangerous the zone will be. Also watch out for red circles on the mini-map: these are groups of more than 11 players who may try to kill or (gank) you.

You must manage your reputation levels, otherwise, you’ll get banished to the Outlands eventually. That means that you must pick your targets wisely. Here is how:

If you are not actively trying to gank somebody, always flag friendly. Otherwise, other friendly players can attack you, and if they do and you fight back, you might lose reputation in the process if their reputation is neutral or higher Take advantage of the fact that you can kill negative reputation players without losing any reputation, even if they are flagged friendly. If you are player killing in a zone for an extended period of time, there is a good chance that friendly players will zerg up and try and hunt you down. Fighting back is often a bad idea, even if you win, you’ll lose a lot of reputation. Running away / hiding is often the best option. When killing positive reputation players, make sure that the kill is worth it. Don’t kill low value targets with a high reputation level unless they are flagged as hostile. Keep your kill group as small as possible, or even go solo. The reputation loss for 5 players scoring 10 kills as a group is equal to the reputation loss of 5 solo players scoring 10 kills each - for a total of 50 kills. In a nutshell, the reputation system encourages small scale guerilla tactics and careful target selection.

If your reputation level is below Suspicious, you can no longer access blue zones and once you are Nefarious you can only access the black zones. It doesn't matter how bad reputation is, you always have access to all the royal cities: Thetford, Martlock, Fort Sterling, Lymhurst, Bridgewatch and Caerleon.

Retrieved from "https://wiki.albiononline.com/index.php?title=Reputation&oldid=58171"
Welcome to the Albion Online Wiki, the comprehensive reference written and maintained by the players.