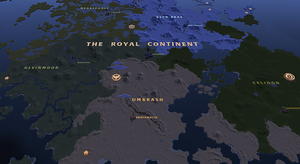 Caerleon has a city-specific crafting bonus of 15% to War Gloves, gathering tools, demolition hammers, and food.

Retrieved from "https://wiki.albiononline.com/index.php?title=The_Royal_Continent&oldid=65225"
Categories:
Welcome to the Albion Online Wiki, the comprehensive reference written and maintained by the players.