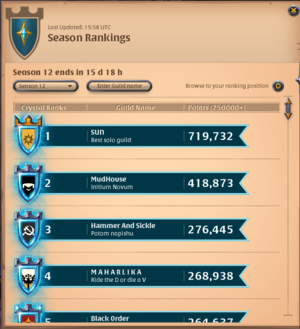 Depending on the guilds season points they will be ranked for the GvG Season and are eligible for special rewards.

Season Points earned from the Guild Challenge depends on its level.

Territories score 100, 140, 180, 220, 260 or 300 Season Points every day at the zone's primetime, depending on the zone's quality level. The closer to the center the Territory is, the more Season Points it scores. Territory scores can be further increased by leveling up the tower.

The closer to the center the Castle is, the more Season Points it scores

The closer to the center the Castle Outpost is, the more Season Points it scores

You will earn more season points the closer you are to the centre of the Outlands, with a maximum of up to 6x the base amount.

Veteran Bosses (found in black zone static open-world dungeons) only classes as a boss if it has those pointy rings under it's feet.

Only Bosses found in Black Zone will reward Season Points.

Retrieved from "https://wiki.albiononline.com/index.php?title=Season_Points&oldid=64251"
Welcome to the Albion Online Wiki, the comprehensive reference written and maintained by the players.