A Siphoning Mage is a NPC that spawns in any occupied Resource Territory or Farm Territory in the outlands. It 'drains' siphoned energy for the occupying Guild and awards season points.

Siphoning Mages can be killed by players of other guilds who invade the territory to steal the siphoned energy and Season Points they generate. 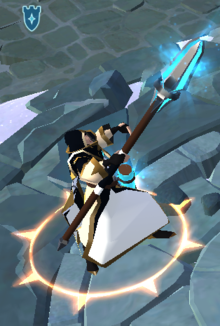 Killing a Siphoning Mage awards Siphoned Energy as loot and season ranking points. Depending on the territory location in the Outlands the mages drop different amounts of energy 10, 20, 30, 40, 50 or 60. For exact max value per territory with 4 Siphoning Mages spawned, see the Territory Season Point Values table on the Season 8 wiki page. Siphoning Mage values can be increased by a factor of 1.1,1.2,1.3,1.4,1.6,1.8 or 2 by raising your Tower Level.

The amount of Season Points rewarded is equal to the siphoned energy amount dropped. If there are multiple Guilds involved in the kill the player who scores the killing blow, will be credited with the energy.

In case the mages are alive at the start of the territory prime-time they will award the owning guild season ranking points.

In addition to their standard auto-attack, siphoning mages can also cast a hoarfrost like spell, dealing area damage in a small radius.

Defensively, siphoning mages have the ability to cast ice block (possible ice blocks at 70% - 45% - 10% HP), making them immune to all damage.

The number of ice blocks a Siphoning Mage will use is based upon the number of players attacking it:

Retrieved from "https://wiki.albiononline.com/index.php?title=Siphoning_Mage&oldid=40672"
Welcome to the Albion Online Wiki, the comprehensive reference written and maintained by the players.