Skinning is an activity where players go into the blue, yellow, red or black zones to kill animals and take the skin off their corpses, using a skinning knife.

Animals are mostly found in the Steppe biome, surrounding Bridgewatch. They are also found in Swamp and Forest biomes.

Upon killing an animal, they will drop on the ground and when they do, you will be able to remove their hide. Simply approach the animal and click on it so long as you have a skinning knife that is the same tier or higher. You can also skin flat-tier animals with a knife that is one tier below the animal. For example, a t3 knife can skin a t4 animal that is not uncommon/rare/exceptional.

The act of skinning an animal can also fill both Generalist and Gamekeeper journals.

Here's an example of a dead snake in Thetford: 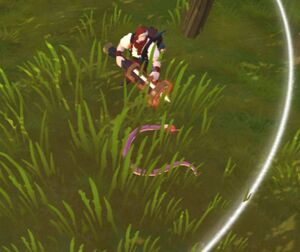 Hide is stackable; the maximum stack is 999.

What to do with Hide?

Skin or "Hide", can be refined into Leather that can be used to craft leather gear or be sold in the marketplace.

Retrieved from "https://wiki.albiononline.com/index.php?title=Skinning&oldid=55982"
Welcome to the Albion Online Wiki, the comprehensive reference written and maintained by the players.