Current release: Into the Fray 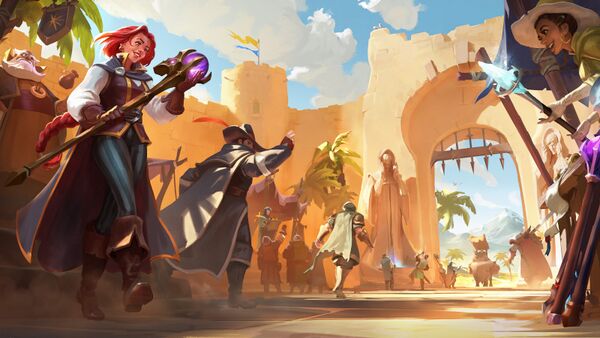 On June 8, 2022, the Into the Fray update went live. Albion Online's twelfth major post-release content update brings a host of new features, changes, and improvements to make combat, exploration, and economic activities in Albion more fun and thrilling than ever, while also allowing players of all types and levels to get into the action more easily. First off, this update sees a massive overhaul of the game's Magic Staffs. Alongside notable improvements to visuals, audio, and animations, numerous new and reworked abilities bring renewed depth and strategy to Staff gameplay, allowing Mages to feel powerful and in control in battle while offering diverse cooperative and counterplay options for non-Staff users.

In the Outlands, new Portal Towns extend the Royal Cities into Albion's black zones, offering a safe and convenient entry point while reducing overcrowding in the Royal Cities. Castles and Castle Outposts have been upgraded, with reworked layouts and graphics giving them more immersive and unpredictable gameplay, while changes to their timers and chests will make them a more dynamic element of guild warfare. Albion's 5v5 scene also gets two major new features: the Crystal Arena, a ranked Arena system with quick signups and rewards that increase with progression, and the Non-Lethal Crystal League, which offers newer PvP players a way to participate in the Crystal League without huge starting costs. Both these match types offer new rewards, including new Wardrobe Skins unique to each, along with Fame and Silver. And for PvP players, Victory Emotes offer a range of eye-catching ways to celebrate kills.

New Dynamic Events offer bonuses to all players for participating in a wide range of time-limited activities, encouraging new gameplay experiences while rewarding dedicated crafters, gatherers, and fighters. And along with a new Activities UI, the update brings many quality-of-life improvements like Muted Player and Custom Match UIs, Lost Equipment Loadouts for quick regearing, improved and reworked Resource Graphics, Training Dummies on Islands, Mobile Controller Support, and much, much more.

The Albion Wiki Team currently has room for one additional Wiki Guardian to join us!

Propose the text for the next featured article here.

Check out the Percival Update Page for a quick overview of all the features of this update.

This update further builds on the Randomized Dungeon system introduced with the Oberon update, introducing the long-anticipated Solo Randomized Dungeons. These new dungeons include new mobs with unique appearances, animations, and skills, complemented by a variety of all-new spells and abilities across a wide range of weapons.

Percival brings numerous new character and item customization options to the world of Albion, from dozens of mount skins to a range of new hair, beard and face options. You can change your looks at any time, as often as you want, and from anywhere in the world to give your characters their own personalities and make them stand out in a crowd.

Check out the Percival Update Page for a quick overview of all the features of this update.

The Albion Wiki Team currently has room for one additional Wiki Guardian to join us now!

Retrieved from "https://wiki.albiononline.com/index.php?title=Template:Main_Page/featured&oldid=62434"
Welcome to the Albion Online Wiki, the comprehensive reference written and maintained by the players.